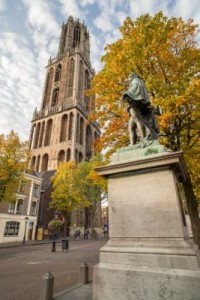 Although the languages of the world may appear incredibly diverse to a casual observer,a closer look reveals that they are remarkably similar at the deeper level of grammar. Compared to the infinite variety of how languages could construct their sentences, the underlying syntax tends to cluster in limited areas of the available space of possibilities. This underlying sameness has led to the concept of Universal Grammar (UG), a set of grammatical properties underlying all languages. UG consists of properties which are invariably the same for each language, Principles. Other properties, Parameters, have to be set in one of a limited number of ways. Since the set of parameters and the range of options to fix them are restricted in the same way for all languages, variation between languages is also systematically limited.

The specific research topic of this project is the variation in the expression of subject-predicate relations, a core relation in human language. In a sentence such as He dances, the predicate dance describes a property of the subject He. Surprisingly, languages differ in their expression of this basic relation. Even more surprising is that the Dutch languages (including Dutch dialects, Frisian, Negerhollands and Afrikaans) show a similar range of variation in this area, both synchronically and diachronically.

The project aims to investigate whether these surface similarities between macrovariation, synchronic and diachronic microvariation are also present on a deeper level of grammar.